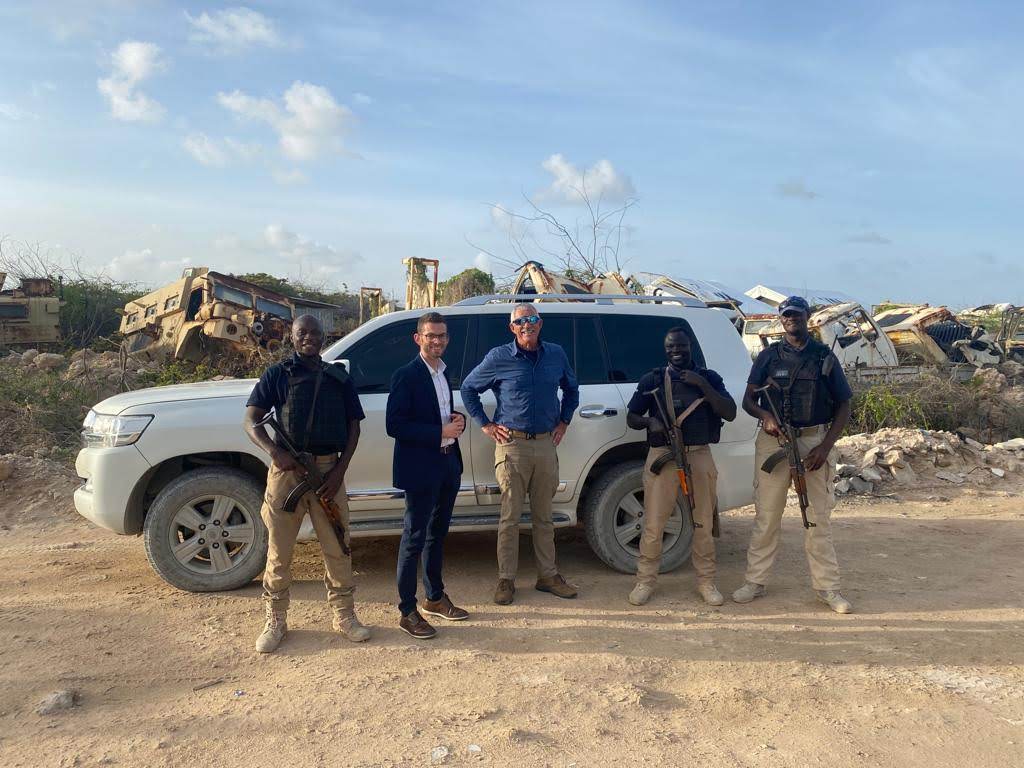 As part of our regular field visits, an ICoCA team spent a week in Mogadishu, Somalia in July 2022. The team met with nine Member companies and four prospective members as well as with organisations contracting private security services and representatives of the United Nations Assistance Mission in Somalia (UNSOM). The visit allowed ICoCA to better understand the Somali operating environment and the challenges that private security companies (PSCs) face in implementing the requirements of the International Code of Conduct in that specific context. In addition, it provided an opportunity to gather feedback from companies on the recently-launched ICoCA online training and to seek their input on the development of additional capacity-building material. During meetings with clients, ICoCA discussed procurement practices, clients’ due diligence responsibilities over contracted providers, and the benefits of contracting ICoCA Affiliate and Member companies. All the PSCs engaged during the mission demonstrated a clear commitment to human rights and the International Code of Conduct.

Internal conflict in Somalia has been ongoing since the early 90s, representing one of the oldest wars on the continent. Power vacuums, territorial disputes among different regions of the country, and the presence of capable terrorist groups have made Somalia particularly unstable and dangerous. In this context, the risk for civilians continues to be high and is exacerbated by the lack of effective accountability mechanisms and rule of law.

Notwithstanding improvements in recent years, Somalia continues to suffer from high levels of insecurity. Protracted political instability, coupled with an increase in piracy activities along the coasts of Somalia during the first decade of the 2000s, has generated a significant demand for private security services. PSCs, both local and international ones, are therefore seen as critical actors in supporting the development and stability of the country. Private security is also seen as an essential asset for foreign organisations trying to operate in the country, particularly for business entities, NGOs and members of the international community.

Both local and international PSCs operate in Somalia. Precise figures on the number of companies are not available, but discussions held by ICoCA with various stakeholders suggest that there were at some point over one thousand PSCs operating across the country. Of these, only a small fraction appears to be able to bid on large international contracts – with the majority being ICoCA Member companies.

PSC regulation is fragmented in Somalia and licensing processes also vary between South-Central Somalia, Puntland and the self-declared independent state of Somaliland. In Mogadishu, where the ICoCA mission took place, the competent licensing authority is the Ministry of Security, with UNSOM also conducting checks over private security personnel, vehicles and weapons. As a result of this fragmentation, only a handful of PSCs are able to effectively operate country-wide.

In order to be able to operate in Somalia, international PSCs must partner with local providers. However, some companies reported that they were authorised to operate even without a local partner.

The ongoing UN arms embargo on Somalia makes the procurement of weapons and other equipment particularly burdensome for PSCs. This pushes some companies to source weapons from the black market. Regional-specific constraints also apply to the operations of PSCs, such as those related to recruitment and the lack of infrastructure.

Implementation of the International Code of Conduct

Local constraints and industry practices can make Code implementation challenging. With regard to personnel recruitment, the workforce of PSCs operating in Somaliland and Puntland is predominantly composed of local nationals. Recruitment processes are often influenced by clan dynamics and the need to maintain peaceful relationships among the different groups. This, however, can have an impact on the fitness of recruited personnel, with companies often forced to compensate for deficiencies with additional training. PSCs operating in South-Central Somalia, and particularly those operating within the Aden Adde International Airport zone (AAIA), heavily rely on the recruitment of third-country nationals (TCNs), particularly Ugandans and Kenyans – this mostly because of the law prohibiting local nationals to carry firearms within AAIA, unless members of the regular armed forces. Recruitment of TCNs is carried out by recruitment agencies in their countries of origin. Without adequate supervision on the part of companies, the risk of recruitment fees and potential debt bondage is high.

The private security industry in Somalia continues to be male-dominated. However, more and more companies are starting to recruit women in operational roles, also to respond to client demand in this sense. The recruitment of women requires companies to be even more attentive to aspects such as accommodation and prevention of sexual harassment, exploitation and abuse.

Low labour standards also raise concerns. There is no minimum wage law in Somalia and no common agreement between PSCs on the matter. Few clients require in their contracts the payment of a determined minimum wage. PSC personnel, including at the management level, are mostly recruited as contractors and paid only for the amount of time worked. Some companies, however, provide personnel with a stipend while on leave. The length of work shifts and personnel rotations is often determined by client requirements. In some cases, guards’ long shifts (12 hours per day, 6 days per week) and rotations (11 months on, 1 month off) can have a negative impact on their welfare, notwithstanding their efforts to maximise the amount of time worked in order to increase salaries.

Common training standards are also lacking. Companies develop their own training programmes based on organisational needs and client demand.  All PSCs that engage with ICoCA or provide services to international organisations provide personnel with human rights training. The increased roll out of ICoCA guidance and training, as well as continued engagement with clients, were seen as being of high value.