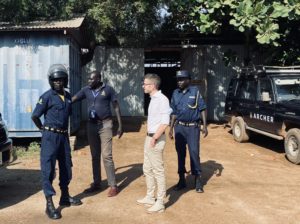 After an 18-month hiatus due to travel restrictions resulting from the COVID-19 pandemic, ICoCA resumed its field visits with a one-week mission to Juba, South Sudan, in mid-November. The visit enabled ICoCA to meet directly with private security providers in South Sudan, including one ICoCA certified member and two affiliates, to understand how the Code is implemented in the South Sudan context and the associated challenges. The team was able to meet with prospective ICoCA members/affiliates, clients of private security companies—including the substantial humanitarian sector—and raise awareness about ICoCA and the importance of the Code in ensuring human rights in the private security sector.

Numbers are difficult to determine, but in the capital Juba there are understood to be around 80 registered private security companies, of which perhaps 15 appear to have a physical presence and provide physical security services. Of the 15, three are linked to ICoCA with one certified member and two affiliates. Given the shape of the national economy, the private security industry focuses on the UN/NGO sector with man-guarding being the main security service provided. As aid is provided to local communities across the country, security companies will often have to deploy guards to numerous remote field sites, presenting a significant logistical challenge, particularly for training and supervision, which is further hindered by poor communications. Other noteworthy consumers of private security services are the extractive industry, both in Juba and in the main oil producing regions, such as Upper Nile and Unity states, private businesses, such as hotels in Juba, and diplomatic missions.

The private security sector is a major employer across the country with guards generally viewed as unskilled. Except in Juba, guards are typically from the local community—if they are not then they will likely face hostility from the local community which sees such positions are being ‘for them’. Salaries for guards vary hugely. Those companies which compete purely on price will often have guards with a take-home pay of less than USD 2/day. As can be expected, such low rates will see guards taking on additional jobs and will subsequently be less effective. NGOs were often cited as contracting based on price alone, and accordingly will assume a higher level of operational and reputational risk. For companies which compete on the quality of services offered their guards will have significantly higher salaries, and will typically receive much higher levels of training. Such guards will receive USD 100-200/month. This amount can be significantly higher than for local public officials, and also for guards in other countries in the region (which can in part be explained by the high cost of living in South Sudan where a very large proportion of foodstuffs are imported). It is not unknown for clients of private security companies to top up the salaries of their guards, in part to motivate and encourage loyalty.

Regulation of the private security sector by the South Sudanese authorities is limited. 2013 regulations were never fully enacted and a strong system of appropriate regulations is absent. Only one company is licenced to be armed despite several other companies making applications. To manage this gap, private security companies routinely embed police officers in their teams.

ICoCA met with several private security providers in South Sudan. The unique challenges that the country represents were discussed, along with ways in which ICoCA can provide stronger support to members and affiliates. Training in particular was addressed, and how ICoCA can better calibrate its online training to be used in areas of limited internet connectivity.  Of note, one company advised that they are seeing an increase in reference to ICoCA membership in tendering, a point that has pushed them towards applying for ICoCA membership.

Meeting with the humanitarian community

ICoCA met with members of the humanitarian community, including various branches of the UN, NGOs and international development organisations. ICoCA’s focus on human rights is a natural point of alignment with the humanitarian sector and we hope to see increased used of ICoCA references in tendering in the future. There was widespread recognition that using responsible private security providers reduces operational risks for the sector.